Current and previous members gather for our 40th anniversary 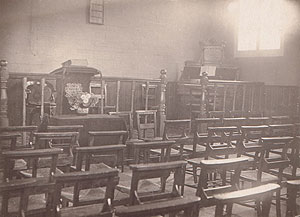 Emmanuel Chapel was the name given to a new church which was founded in January 1917. This group of eight Christian people had withdrawn from other churches in the town to form a gospel-centred fellowship, because these other churches had adopted a liberal theological position. The new work was supported both by the Mission Hall in New Bradwell and the Orphanage Chapel in Stony Stratford.

The church initially met together in a rented upstairs room at the rear of a property in Stratford Road but in order to acquire a more permanent meeting place they purchased two adjacent properties in Church Street (numbers 106 and 108). A schoolroom was built across the back gardens of these houses and it was envisaged that, as funds allowed, the two houses would be converted into a church building facing on to Church Street.

The foundation stones of the schoolroom were laid at a special service held on Monday afternoon 17th July 1922. At the laying of each stone an appropriate verse of Scripture was read and the desire was expressed that this building would be ‘a place for the Lord’s service where the gospel would be preached in its simplicity and power’. Mr J C W Fegan was to have laid the first stone but was unable to attend because of ill-health, however eighteen boys from the Orphanage at Stony Stratford were present to lead the singing of the hymns. The formal opening of Emmanuel Hall took place on Thursday 9th November 1922.

This building, now known as Emmanuel Hall, became the meeting place for the members of Emmanuel Chapel whose numbers had, by 1922, increased to thirty. There had been several baptisms and a good sized Sunday school established. An active gospel testimony was maintained for a number of years but mainly due to the disruption caused by the outbreak of the Second World War the fellowship disbanded. Remaining members transferred to New Bradwell Mission Hall. Wolverton Town Council took over the building for use as a recruitment centre for those who were being called up for war service. After the war ended Emmanuel Hall became the town’s employment exchange. In 1979 when a job centre was established in the Agora centre, the trustees put the building on the market.

In 1972 a new and independent Baptist church was formed under the leadership of a missionary from the USA who chose to settle in this area because of the construction of the city of Milton Keynes. The believers who joined this cause first met in the Scout Hall in Furze Way and then later in the then disused West End Methodist Chapel. Door to door visitation, evangelistic services and children’s missions were the main means of outreach and a number of people were converted in these early years.

In 1981 the New City Baptist Church, as this new work was called, purchased the now vacated Emmanuel Hall. Later a manse was purchased and a full time pastor called in 1984. A second property was bought in 1988 to give more space for the church’s operations, particularly Sunday School work.

In 1990 the church became involved in the planting of a new church in Buckingham. There was at the time no Evangelical cause in the town and many Christians living there were travelling to find fellowship. There was also a need to provide pastoral care for students coming to study at the expanding university.

Also during 1990, conscious that it needed to re-develop an interest in overseas mission, the church began to support Toni Hermano in his work as a church planter and Bible teacher in the Philippines. Toni had studied at London Theological Seminary and had visited the church on a number of occasions and strong ties were established. Our pastor visited Toni in the Philippines in 1998. Find out more regarding our missionaries here. 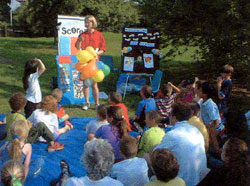 In 1999 the name of the church was changed to Wolverton Evangelical Church in order to give it a clearer identity both theologically and geographically. At this time too, the church became associated with the Fellowship of Independent Evangelical Churches to express its solidarity with other Bible based churches across the country.

Over the years we have undertaken various forms of outreach: door to door visiting, open air meetings, leaflet distribution. The year 2000 gave us the opportunity to hold an AD exhibition involving a number of schools in the area.

In 2002 one of our members, Allan Huxtable, was set aside to study for the pastoral ministry and began a course of studies at the London Theological Seminary. Allan was appointed pastor in October 2008.

Soon after this we moved to Bushfield school for our morning service.